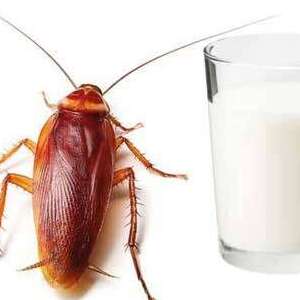 In 2016, an international team of scientists from the Institute of Stem Cell Biology and Regenerative Medicine in India, extracted a protein crystal found in the gut of cockroaches.

Because they discovered that this is four times more nutritious than cow’s milk, they do not rule out that it could be used to feed our growing population in the future.

The majority of these insects do not actually produce milk, escept for the cypress cockroach or Pacific cockroach (Diploptera punctate), the only one of its kind that gives birth to live offspring and secretes a type of “milk” that contains protein crystals to feed its babies.

What fascinates scientists is the fact that these protein crystals possess more than three times the calories found in an equivalent amount of buffalo milk (higher in calories than cow’s milk).

As milking a cockroach would be rather difficult, the scientists decided to evaluate the possibility of replicating the substance in the laboratory.

This was explained by Sanchari Banerjee, one of the co-authors of the research, in a 2016 report with the Times of India:

Crystals are like a complete food: they have proteins, fats and sugars. If you look at the protein sequences, they have all the essential amino acids.

Perhaps not suitable for weight watchers but it could work very well for those struggling to get a sufficient amount of calories per day.

Now that scientists have the sequence, they hope to obtain the yeast to produce the crystals in much larger quantities, which is more effective and less disgusting than “milking cockroaches”.

Who needs other supplements when cockroach milk contains so many nutrients? No-one while there is a choice!