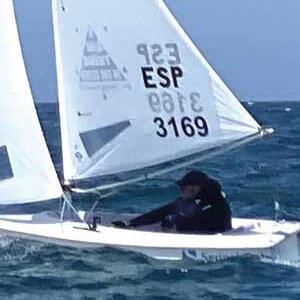 A large number of competitors from Portugal and Spain came to the Port of Sotogrande to compete for the I Regatta Spanish Cup of Adapted Sailing Trofeo Ibérico, which was held from May 20 to 23.

This regatta is part of the calendar of nautical activities sponsored by Puerto Sotogrande, SA and organized by the Real Club Marítimo Sotogrande (RCMS). The San Roque City Council, as well as other relevant commercial brands joined this event, a demonstration of courage, effort and improvement are combined.

This competition, began on the Thursday and ended on Sunday, showing a strength in selfdenial, tenacity, perseverance, spirit and many other virtues associated with the need to win.

Jordi Cargol in 2.4 MR, and Daniel Llaca in Hansa 303 individual, were proclaimed champions of Spain in the waters of Sotogrande, San Roque.

Although it was the Iberian Trophy, Joao Pinto did not participate in the Spanish championship, nevertheless he has obtained the Iberian trophy for making a large number of consecutive rounds.

During the four days the changing winds have sharpened the instincts of the participants in taking the better of the prevailing conditions near the Strait. Over the four days, the disabled sailors made use of the Puerto Sotogrande as a test base of endurance.

This event was a joint effort, a commitment of collaboration between Puerto Sotogrande SA and Real Club Maritimo, both entities working to support integration through the sport of sailing.

Although it may be a sport for handicappers, the total number of boats between Spanish and Portuguese was 30 showing a greater knowledge of sea conditions every day of the competition since to navigate it is necessary to use the five senses. On Thursday and Friday the wind weakened although it was possible to test the ability to comply with the minimum number of heats required for the validity of the test.

Puerto Sotogrande in its social concern has adapted the sailing school together with the Real Club Maritimo Sotogrande and the celebration of this Cup as a to a start of other new similar tests in the navigation of the Sotogrande “Estrecho” with its ideal conditions for regattas from the technical and climatological point of view.

The Royal Maritime Club in its objective to promoting nautical sports, and especially sailing, defines nautical as an essential value for personal development and it makes a good team with the Puerto of Sotogrande for the further scope of developments in the future.

This cooperation meets with the full support of the San Roque City Council.