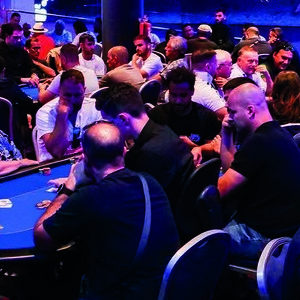 THE CASINO MARBELLA BEATS ALL PARTICIPATION RECORDS IN THE SPANISH POKER CHAMPIONSHIP & MORE THAN €320,000 AWARDED IN PRIZES

The Spanish Poker Championship has returned to Marbella stronger than ever.

The Main Event broke the record, bringing together almost 500 players and accumulating €207,360 in prizes, the highest ever.

For over a week, Casino Marbella became a spectacular Poker Room, in which, in addition to the Main Event, several parallel tournaments took place simultaneously. More than 1,000 players, including the most prestigious on the Spanish scene, have chosen Casino Marbella to test their skills in the art of poker.

On Saturday, October 8. A total of 171 hopefuls competed in order to secure their place in the main tournament. Day 1 of the Main Event began on Thursday, October 13 with a spectacular opening, of 200 players starting the challenge. This was the harbinger of what was going to happen the next day. On Friday, Day 1B, the numbers were increased with 290 more participants, making a total of 490 entries.

After 3 days, Antonio Galiana, from Malaga, resulted as the champion with an Ace and a 9 of clubs.

The Casino Marbella continues to offer an impeccable environment with proposals as attractive as the High Roller, which has undoubtedly been one of the biggest claims that this stop has had. On Thursday the 13th, this great tournament with an entry price of €1,100, managed to bring together seventy-nine brave men viewed by more than 3,500 visitors attracted by the live poker show.