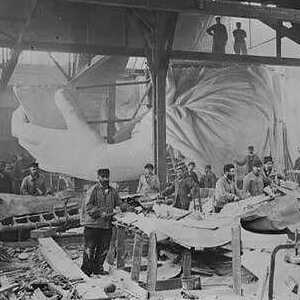 Auguste Bartholdi was so moved by the end of slavery in America that he decided to do something rather special, a copper statue to symbolize the union of the French and American people to defend freedom, equality and brotherhood.

Having selected Bedloe Island as the ideal site(today’s Liberty Island), in 1871 he returned to Paris and asked the engineer Gustave Eiffel to help him create the interior structure that would support the huge copper plates that formed the sculpture.

Once completed, it had to be taken apart piece by piece and 210 wooden boxes were need to store the material. The weight of the pieces varied between seven kilograms and four tons and were then taken by train to Rouen a port town on the banks of the River Seine.

A warship named Isère was chosen as the most suitable vessel for the journey and having carefully distributed the weight within the vessel to avoid the risk of splitting the ship in a storm, the loading was complete on 20th May 1885 and the ship left for its destination in New York.

Having endured a few storms on the way, 27 days later the Isère arrived in New York Harbour where thousands of people welcomed it.

On October 28, 1886, the Statue of Liberty was inaugurated on its granite pedestal. The act served to commemorate the first centenary of the independence of the United States.

Originally the statue was of a reddishbrown copper colour, but twenty years later it had built the blue-green colour patina we all know today.

The ship Isére, after making the famous delivery, returned to the port of Brest in France and was used to store coal. During World War II, the German army brought it to the Loreint submarine base and almost at the end of the war, they sank it.