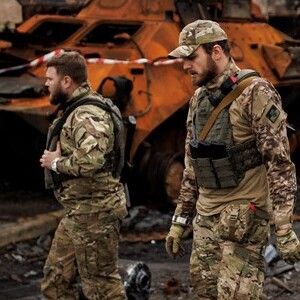 IT SEEMS THERE IS NOT MUCH SPIRIT LEFT FOR THIS FIGHT

Paul Niland, a Ukrainian current affairs writer, sat down on LBC Radio to discuss the war in Ukraine. Russian President Vladimir Putin has been waging war on neighbouring Ukraine for over a month now, political commentators and military experts have been speculating as to when the fighting will stop. Peace talks between Russia and Ukraine have been ongoing, and there has been no clear sign of an end in sight. Mr Nilands discussed how Russian soldiers were losing morale as they run out of food and supplies. Mr Mair said: “Does that mean that the war must continue?” Mr Niland said: “Yes until there is an absolute Ukrainian victory the war will continue.

“There are lots of signs… I, unfortunately, sadly I have to watch a lot of what’s going on with the military movements. “The momentum of the war in each direction, we see a lot of problems amongst morale with the Russian troops. He added: “They’ve always had supply line issues, but the supply line isn’t just the fuel that the tanks need it’s also the food, the warm clothing the change of clothing that the soldiers themselves need.”- So you know the soldiers are a month in, the Russian soldiers they don’t have much spirit for this fight left.” “In fact, there was a story today of one particular Russian soldier who decided to run over his commanding officer with a tank because that’s-

how infuriated they are with the terrible military planning that has sent many of them to their death.” A Ukrainian journalist called Roman Tsimbalyuk has been reporting on the story. The soldier allegedly drove a tank into Colonel Yuri Medvedev, after the soldier claims 750 troops out of 1,500 were killed under Mr Medvedev’s command. Mr Tsimbalyuk said: “A military officer of the tank battalion accused the death of friends and co-workers of the brigade commander Colonel Yuri Medvedev. “After choosing a convenient moment, during the fight, he ran over the tank of the commander standing next to him, injuring both his legs.” Mr Tsimbaluk added: “A soldier, choosing a convenient moment during the battle, ran over his brigade commander,

Colonel Yuri Medvedev, with a tank, injuring both his legs.” Adviser to the minister of internal affairs Victor Andrusiv uttered a similar sentiment as Mr Niland. Mr Andrusiv said the commander “didn’t see the point of war”. Mr Andrusiv added: “He could not return home because his commander told him he would shoot him dead and say he died in battle. “Misha told us that he had barely any food left, the command structure was chaotic and almost absent, morale is very low. “We are seeing cases of surrender when Russian troops voluntarily contact our military and declare that they want to surrender, that they do not take part in active hostilities.”