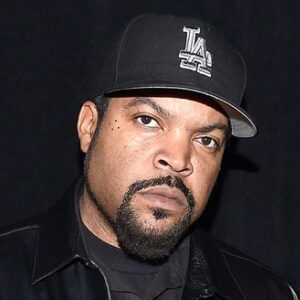 O’Shea Jackson Sr. (born June 15, 1969), known professionally as Ice Cube, is an American rapper, actor, and filmmaker. His lyrics on N.W.A’s 1988 album Straight Outta Compton contributed to gangsta rap’s widespread popularity, and his political rap solo albums AmeriKKKa’s Most Wanted (1990), Death Certificate (1991), and The Predator (1992) were critically and commercially successful. He has also had an active film career since the early 1990s. He was inducted into the Rock and Roll Hall of Fame as a member of N.W.A in 2016.

A native of Los Angeles, Jackson formed his first rap group called C.I.A. in 1986. In 1987, with Eazy-E and Dr. Dre, he formed the pioneering gangsta rap group N.W.A. As its lead rapper, he wrote some of Dre’s and most of Eazy’s lyrics on Straight Outta Compton, a landmark album that shaped West Coast hip hop’s early identity and helped differentiate it from East Coast rap. N.W.A was also known for their violent lyrics, threatening to attack abusive police and innocent civilians alike, which stirred controversy. After a monetary dispute over the group’s management by Eazy-E and Jerry Heller, Cube left N.W.A in late 1989, teaming with New York artists and launching a solo rap career.

Ice Cube entered cinema by playing Doughboy in director John Singleton’s feature debut Boyz n the Hood, a 1991 drama named after a 1987 rap song that Ice Cube wrote. Ice Cube also cowrote and starred in the 1995 comedy film Friday; it premised a successful franchise and reshaped his persona into a bankable movie star. His directorial debut was the 1998 film The Players Club. As of 2020, he has appeared in about 40 films, including the 1999 war comedy Three Kings, family comedies like the Barbershop series, and buddy cop comedies 21 Jump Street, 22 Jump Street, and Ride Along. He was an executive producer of many of these films, as well as of the 2015 biopic Straight Outta Compton.