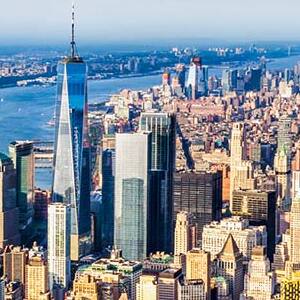 Geopolitics is on fire. New geographic centers of power are being generated and New York loses points as the capital of the world.

New York played a key role in the economic recovery of the United States after World War II, but it is also the city that saw financial speculation flourish. Against that model, a new one is growing based on the production of new technologies and is located just at the other end of the country.

California is the fastest growing area in the United States and the city of San Francisco is already in a position to challenge New York for its economic hegemony. But the rivalry is not only internal. For years, New York has been the city with the most billionaires in the world, not anymore. Beijing has overtaken it. The Chinese city has 100 billionaires, while New York has one less: 99.

New York has managed to build a very powerful image in our collective imagination with more than 11,000 films and many television series. We have seen its skyscrapers and its urban landscape so many times that when you visit it for the first time you have the feeling of having been there many times. In 2019, just before the pandemic, the Big Apple was visited by 68 million people. It was easy to find many tourists sitting in theatre seats enjoying a musical. affirming that New York is the capital of the world. Broadway accommodates 40 theatres on the longest avenue in the city.

The entertainment world before the pandemic contributed almost 15,000 million dollars every year, in this field, it is practically impossible to rival New York. In addition, it has some of the most famous museums in the world, such as the MOMA. The Big Apple is home to many artists, people dedicated to the world of literature, art, design, fashion and music also live there. If we put them all together, we would have almost two million people dedicated to creative work.

New York could be the setting for a movie where anything can happen. It gives you the chance to climb to the top and live the most extraordinary experiences. But if things go wrong, it’s easy to feel its harshness and even his cruelty, there is no middle ground. But many are seduced and bet their lives on that game and the language will never be a problem. More than 180 languages are spoken in the city of skyscrapers.

New York is not the capital of the United States but it is today the capital of the world and the most influential too. Any new trend that emerges there is quickly imitated in other parts of the planet. Why is there this need to imitate what happens in New York? Where lies the strength of its charm?

Perhaps the answer is in its origin. Nowhere in America has seen more history than the southern tip of Manhattan. The Dutch established a trading post there in 1625 and created a tradition of tolerance and a way of life that has endured for centuries.